D roaring on the street in Ramla - an Israeli town between Jerusalem and Tel Aviv: We sit at a rickety table in front of the Arabic hummus restaurant. In the last two hours we have strolled extensively about the great market of the city, have tried this and that and happily absorbed the bustle, the colors and the great goods in us. And now of course we have (again!) Hungry for Hummus & Co. On the table are already a few bowls - and there are still more: Hummus with different toppings, sour-pickled vegetables, bread, fried eggplant, spicy salad with chickpeas and tomatoes, yogurt with spinach. We taste, find everything delicious and savor happy under the patron's eyes. And as is always the case when food lovers meet ... after a short while we are talking to the owner about the different dishes, the preparation and ingredients.

When he realizes that we are not "just "To be polite, but really interested in his kitchen and specialties, his heart opens. Enthusiastically he asks us to try again and again and makes sure that really is eaten by all bowls extensively. Then he calls across the street something in the kitchen and shortly thereafter, one of the cooks appears with another dish. "Just finished," he explains in broken English. "You have to try this too". I'm almost bursting. But when I take a look at the latecomer, I am spontaneously in love: I see roasted cauliflower under a creamy pink sauce! And it just tastes wonderful!

"What did you do with that cauliflower?" I want to know. "That's great!"

I learn that actually not much has happened: The cauliflower was slowly baked in the oven. The pink sauce is based on a Tahina with sesame paste * made of a few ingredients quite uncomplicated mixed. But the combination is really great! And I brought you the vegan recipe of Arabian-Israeli cuisine. Incidentally, the sauce is called Pretty Pink Tahina Sauce. For the sake of it, ne.

If you're into mezze, looking for a great eye-catcher for the buffet, in the summer loves light vegetable dishes with a lot of flavor or you just want to deal more with the Arab-Israeli cuisine, that's just yours Things. 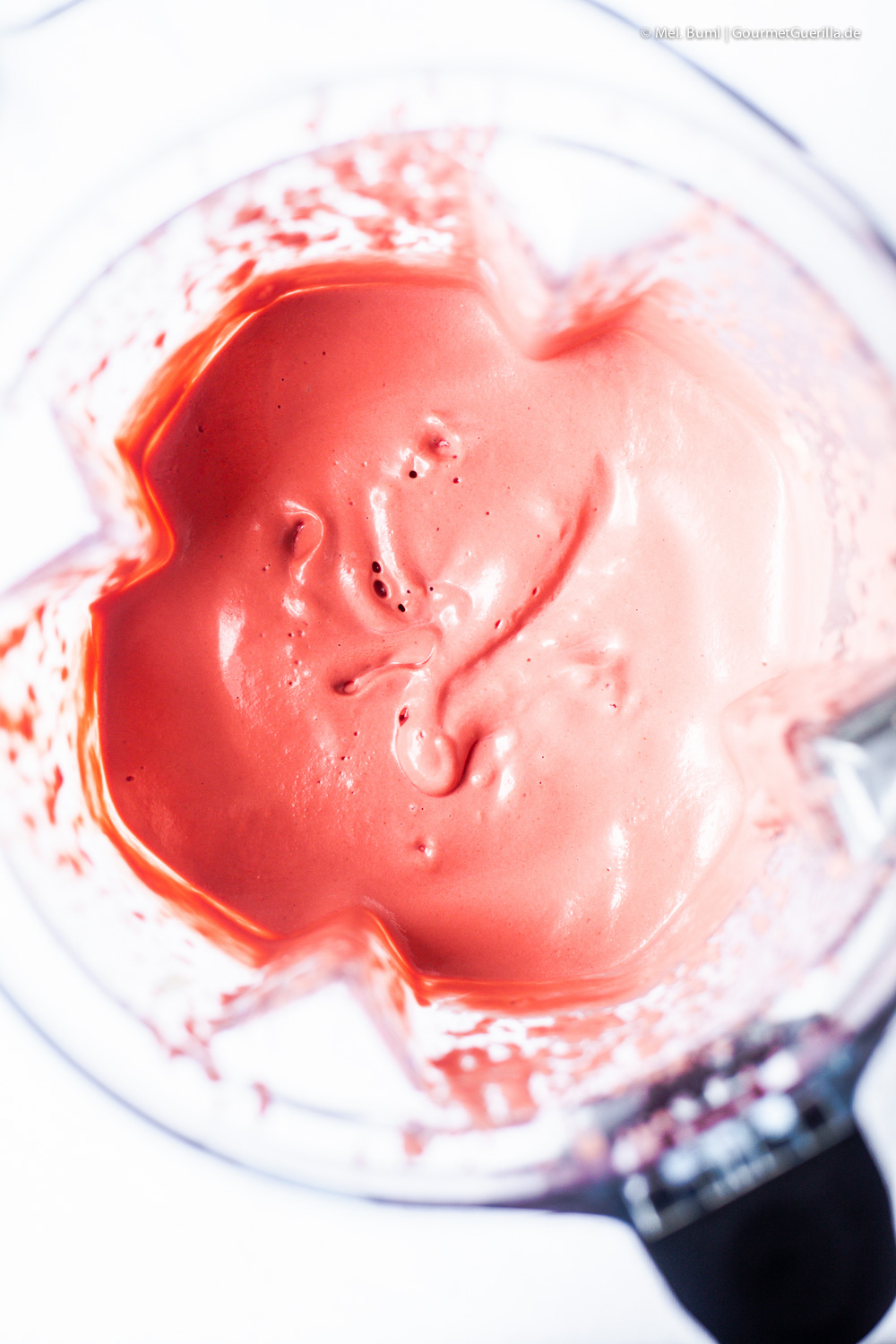 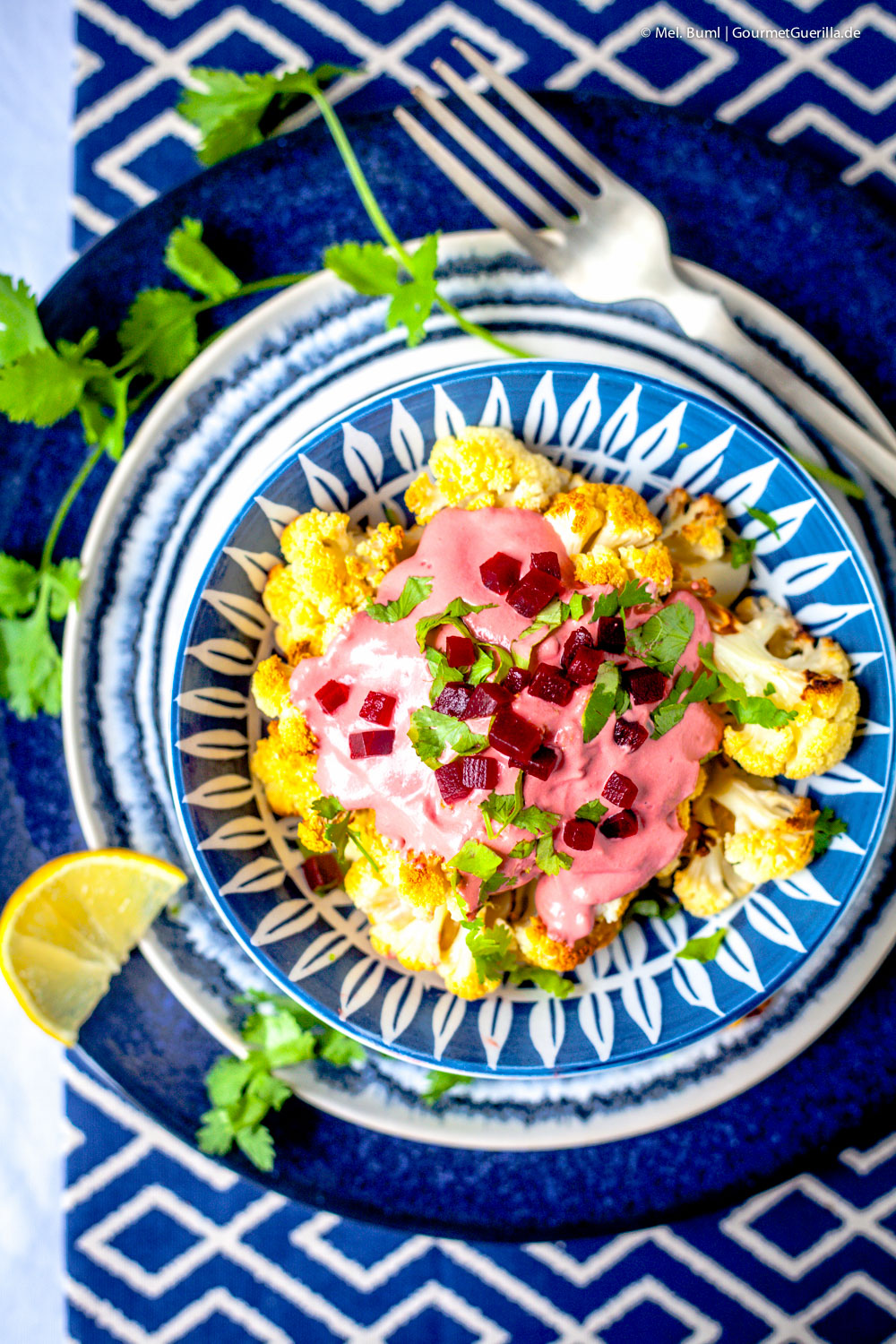 And here comes the recipe for oven-baked cauliflower with Pretty Pink Tahina Sauce.

For the oven-baked cauliflower , preheat the oven to 150 degrees top/bottom heat.

The cauliflower free from the leaves and divide into large florets.Bake for 1 hour in the oven at 150 degrees top/bottom heat. When the plate is very full, gently shift the cauliflower in between.

Allow to cool after baking.

For the Pretty Pink Tahina Sauce
Process the lemon juice with the garlic bulb and salt in a blender to a puree. Allow to steep for 10 minutes to allow the aroma to develop. Then pour through a fine-mesh sieve into a bowl and squeeze as much liquid from the puree with a spoonful.

Put the garlic-lemon juice in a clean blender jar and mix well with the sesame paste and the cumin. Slowly add the ice-water until a homogeneous, light and creamy sauce has formed. Chop the beetroot (1-2 pieces for the decoration), add to the blender and puree until high, until the sauce is creamy and nicely pink.

Finally with salt and lemon juice to taste. Serve cool until served.

Serve
Arrange the cauliflower in a bowl or on a plate and pour over a portion of the Pretty Pink Tahina sauce. Decorate to taste with chopped cilantro and beetroot cubes.

Tip: The rest of Pretty Pink Tahina sauce lasts for 3-4 days in a glass jar. It tastes great on sandwiches, on vegetables, with hot flatbread, as a dip for barbequing - or anything else you can imagine. 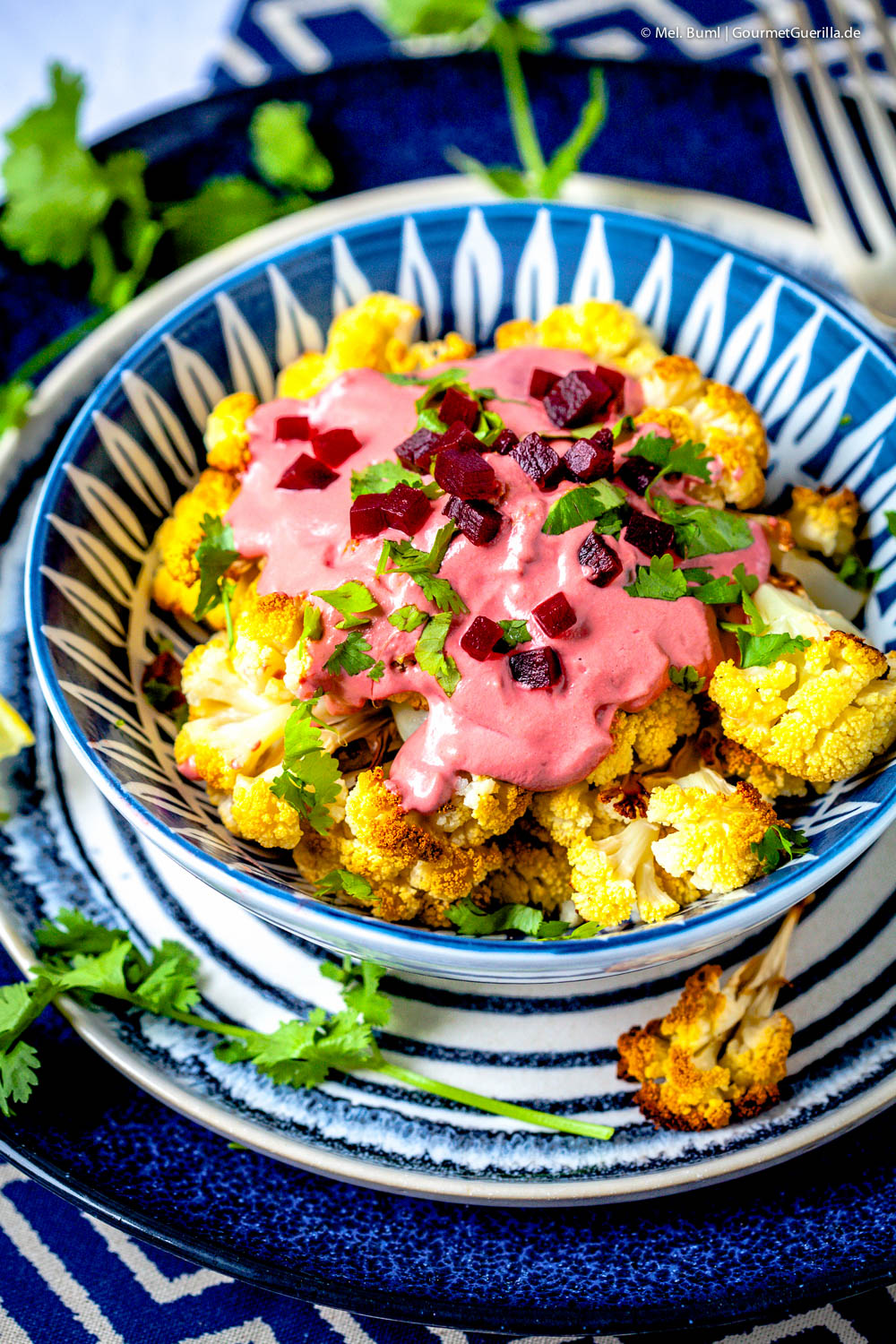 * You can find ingredients and equipment with starlets in the well - stocked retailers or you can order them above Affiliate links on amazon. Of course, that does not cost you a cent extra. And I get a few cents from Amazon as support for the blog work. Thank you for making that possible!

If you want to buy this website, please don't hesitate to contact us via e-mail: domain (dot) sales (dot) org @ gmail (dot) com